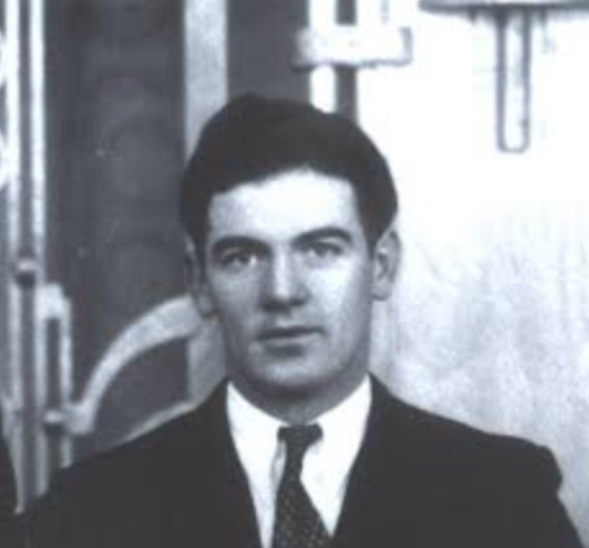 Dad had strong arms, the arms of a working man, the arms of a man who crawled around on silos all day in that steel mill.  We didn’t know – I didn’t –  how he counted on those arms – those working arms – until years later, when I heard him say as he lay in his hospital bed in St. Joe’s cancer ward, with a tremor in his voice: “I used to be so strong.”

Those arms were his pen, his pad of paper, his living.

He was strong, a worker’s body and strength. He was no taller than me, when I was grown.  Strong as he was, Dad’s eyes sparkled and flickered as he sat in front of the television in that narrow living room, in all the upper flats every night, laughing at Lucille Ball, drinking a beer, two, three.  He loved to laugh; his eyes twinkled if he got us to laugh, too.

When I was small, Dad would lay down next to me to tell me a bedtime story.  His favorite was “Jack and the Beanstalk.”  When Jack climbed the beanstalk, he discovered that the giant at the top had lots of food, and cases and cases of beer, in his coffers.  Most of the time, Dad would soon be snoring as I lay awake, always slow to sleep.

As a child, my days began when the alarm went off in my parent’s bedroom – 6 AM.  Mom was up first, her nightgown covered with a chenille robe, in the kitchen, where she reached to the top of the refrigerator to turn on the radio, to hear the weather report.  Day after day, she got the frying pan heated on the gas stove, added the bacon, and two eggs for dad.  The coffee pot perked alongside.  In a few minutes, I’d hear Dad’s footsteps in the back hall, all the way to the basement, where he shoveled coal into the furnace, and shortly, the room I shared with my little sister was warm, that cozy warm of rooms in cold places.  I lay in bed, heavy quilts that kept me overnight covering me.

Winter into late spring, autumn into winter, dad changed the storm windows into screens, fall into winter, he changed the screens into storm windows, year after year after year.  He did it himself.  When he worked, Dad did not talk.  When he worked, Dad lifted those heavy, heavy storm windows by himself from the second story windows, and balancing each one in his strong hands, he fit them into the space they served, bolted them into place, and we were safe again, safe in his strong arms, for the coming winds and snow.

I have a soft spot for working guys.  Maybe I see Dad in them, his truth, his simplicity.  They get the benefit of the doubt from me, and why not? From my earliest days, I knew a man, a good man, full of words and simple love, love that flowed out of his eyes –  and sometimes, tears.