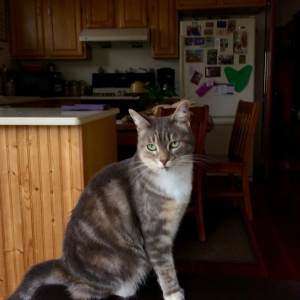 Let me introduce you to my beautiful feline friend, LiLi.  LiLi has lived with me – with us! – for over 4 years now.  She came to us at 6 weeks old, the runt of the litter.  LiLi is my third cat; she follows in the paw-steps of Schatzi and Beauty, the little black and white cat who never came out from hiding.

I learned to love cats after I married Jeff.  I guess I married Schatzi, too.  I used to say that Schatzi was ridiculous, which she was, but she was also a beautiful Maine Coon cat, small for her breed, and she was the best at napping, her back against my chest.  Schatzi was almost 20 years old the week she sat by the heat register, unable to move.  That was the week my mother was diagnosed with inoperable cancer, and I swear Schatzi lived for another 10 months to be with me during that time of death and grief.

Cats are not only beautiful, wondrous creatures; cats are smart, too.  LiLi, whose picture graces this post, is really smart.  She talks!  When she comes in from outside (this is a cat who would never agree to being cooped up inside all day!), she will stand a few feet from me and talk.  Sometimes I talk in her language, and sometimes I speak English.  Either way, we are both engaged, even if her food dish is full at the time.

My theory is that LiLi is touchy about where she is touched because she was the runt of the litter, and maybe she didn’t learn enough from her mama before she was taken away.

Intuitively I know that LiLi is smarter than I can imagine, although she doesn’t make a big deal of it.  She’s just naturally intelligent, that goes without saying, it goes with the package, the package of being LiLi, cat.

Having a cat has brought a whole world of mystery and beauty and dignity into my life, the life of this city-girl.

Thank you, cats of the world!